Reunited and it Feels So GOOD! 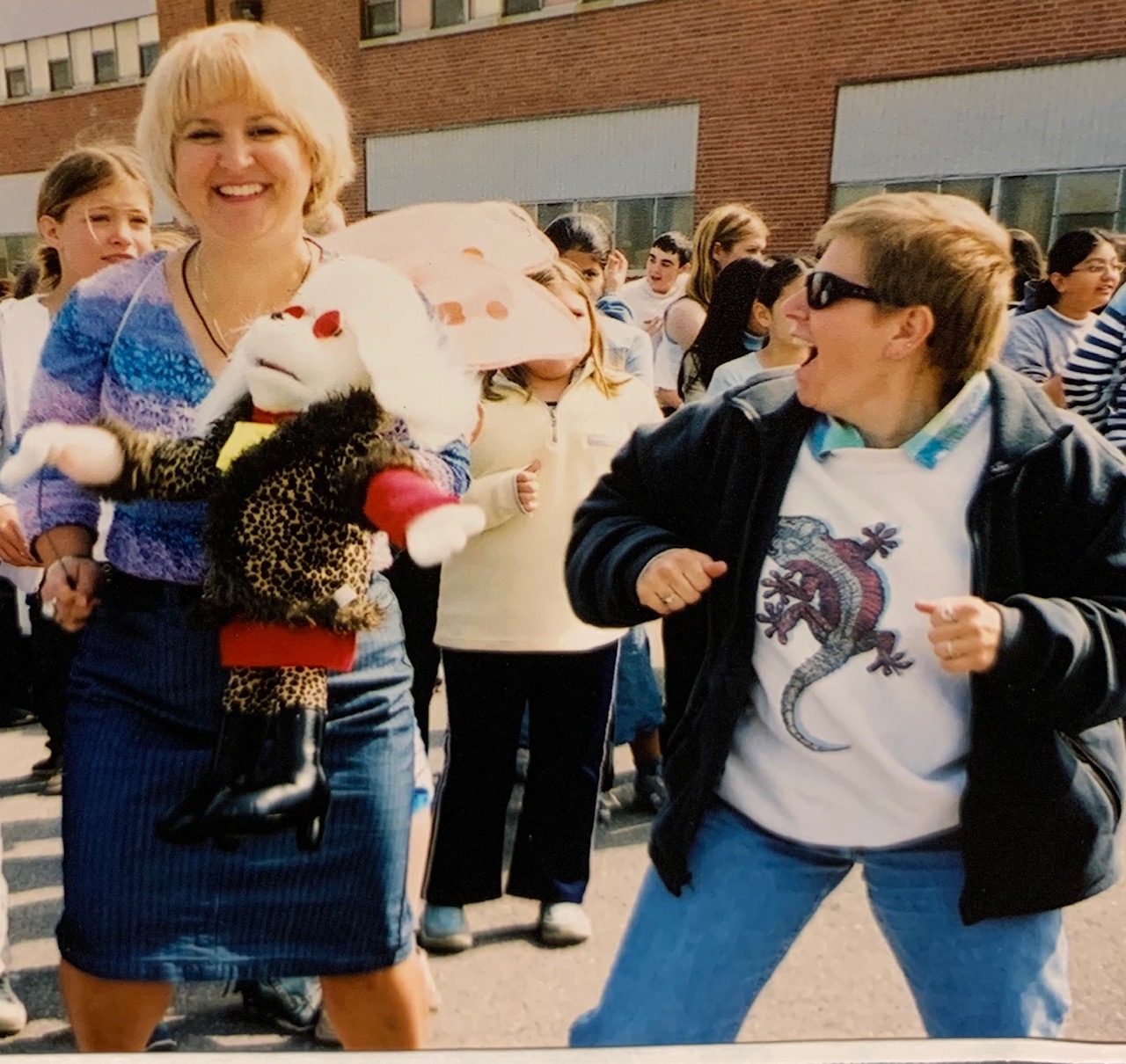 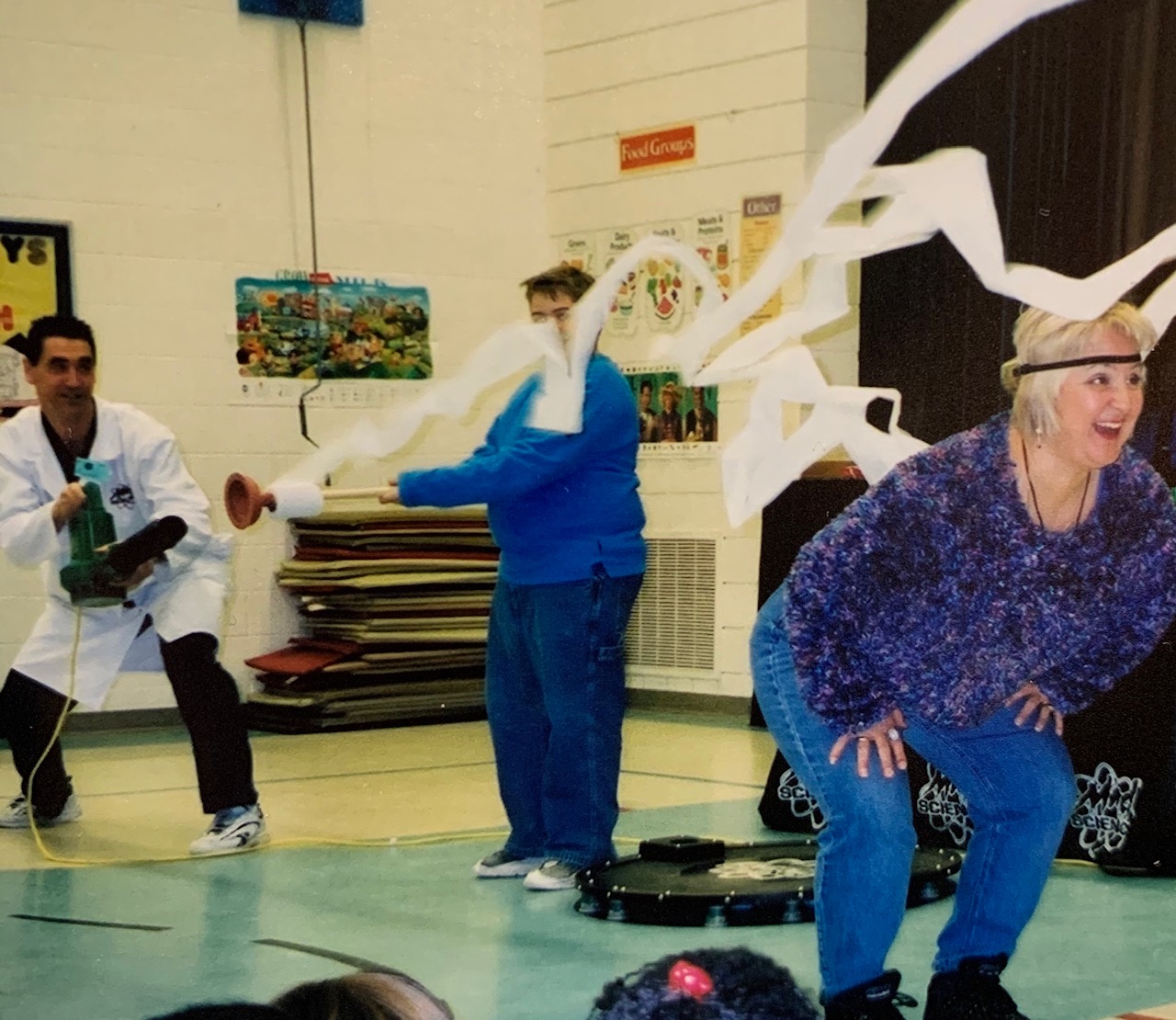 Once Upon a Time, in the early 2000s, the magic of two teaching fairies collided in the universe of Hillsdale, an inner-city school of east Hamilton, Ontario.  As a key part of successfully implementing a social skills program called “Second Step”, staff organized monthly assemblies to introduce the new social skill focus, originally featuring a pair of teachers on rollerblades called “Captain Second Step and Babalouie”.  Later, Leslie and MC enhanced the Second Step materials by introducing various characters from literature in order that the training could dovetail nicely with language arts.

Initially, M.C. took on cross-dressing as ‘Captain Hook’, the obnoxious villain from “Peter Pan”, while Miss Bell hovered around as ‘Tinkerbell’.  Captain Hook shocked the student population (and the teachers)  with rude, uncooperative, and impulsive behaviour.  Tink’s job was to enlist the students in reforming Captain Hook by the end of the year, teaching him how to apply the social skills they were learning.  Students and staff were delighted to see these two zany teachers take on characters and perform impromptu theater while engaging staff and students. (Once, Hook impulsively shimmied up the rungs of the gym climbing unit, slid his leg between the wall and the climber, and got stuck, causing pandemonium!)

To keep things fresh, MC became Dazzle the following year.  She was a very young, naive, enthusiastic, self-absorbed and impulsive fairy who needed corralling and training from Tink.  Through a year’s coaching by Tink and the students, Dazzle matured into compassion, grace and decorum, just as Hook had.  They began to include class dramatic demonstrations to teach the monthly target social skill … for instance, the BFG was used in a sketch highlighting the need for strong listening skills.

In the years following, Fairy Dazzle and Tink morphed into ‘Mac and Tosh’, the inordinately polite ‘Goofy Gophers’ from Looney Tunes who were noted for saying “After, you … oh, no, after, you … oh, no, I insist!”, “Indubitably!”  and, “Shall we?  Yes, I think we shall!”   (Oddly, they settled on Mac and Tosh as characters and then realized the synchronicity of their new principal’s name … Ms. McIntosh!)

Leslie and MC embraced their mission to make learning social skills fun, entertaining and integrated with literacy and literature.  They have since collaborated on several workshops, student theatrical presentations and pieces of writing. They have remained close fairy friends for over 20 years. 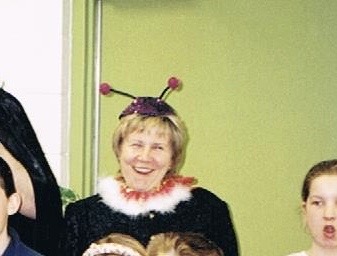 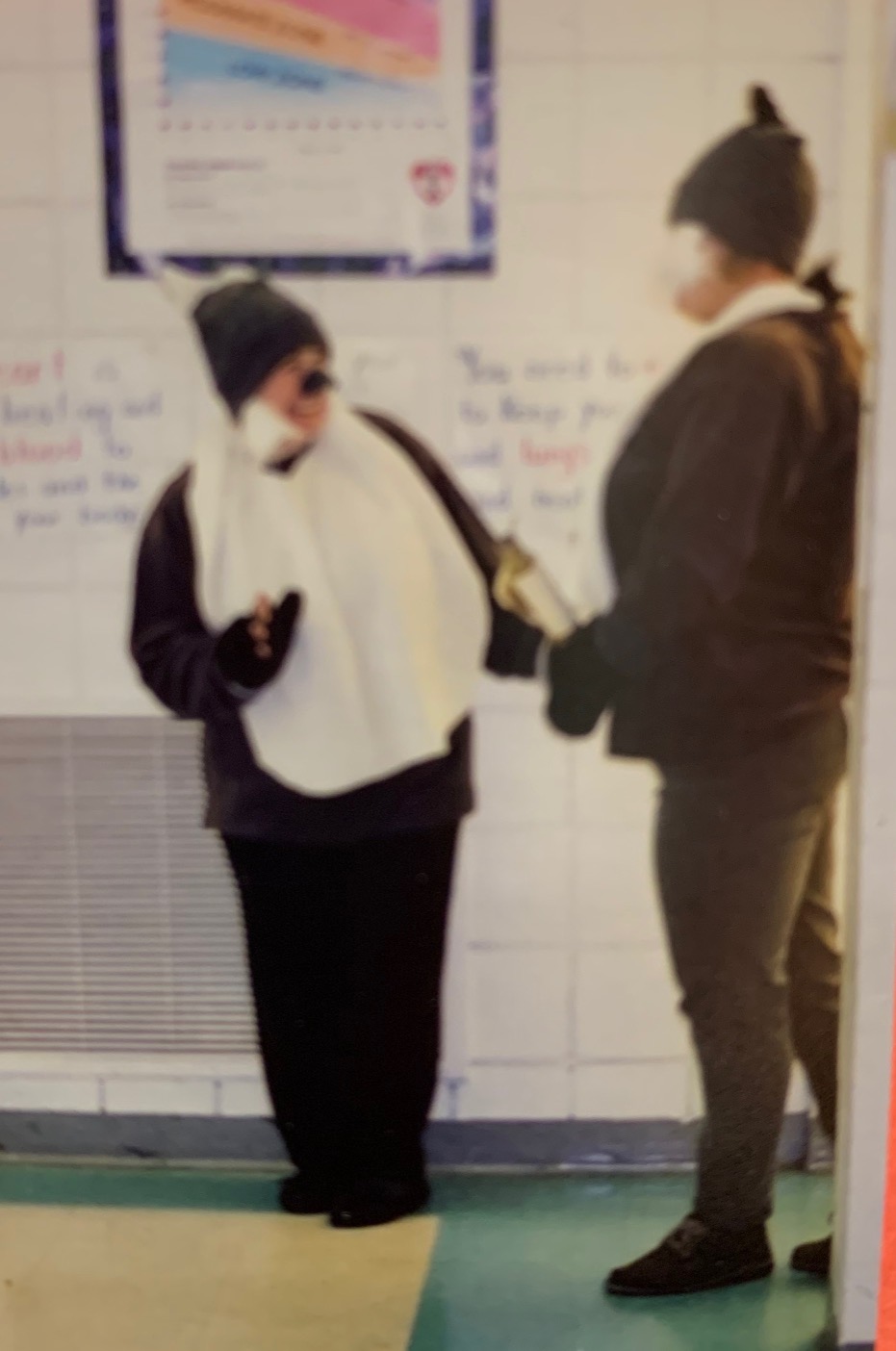 After Covid hit, Leslie and MC found themselves working through personal creative clouds and turned to each other to collaboratively recreate a sense of the fun they’d enjoyed at Hillsdale.  Concerned for teachers and students as school reopened this September, Leslie and MC are determined to offer whatever they can from their fairy bag of tricks. Tink has morphed into ‘Sodalite the Elf’ (Soda, for short), while Dazzle has continued to evolve, trying to make sense of this human world. They are creating short, fun and interesting videos to support social skills, mental health and curriculum, with the intent of lightening the load for teachings during this difficult time.

You can find out more about Dazzle by visiting her About MC page, but here is a little more about Soda (a.k.a Leslie Bell):

Leslie is a bit of a “Jack-of-all-trades”.  During a 30 year career in education, she taught children from kindergarten through Grade 8 in a variety of classroom, library, computer lab, drama and special education settings.  In her life prior to teaching, she was trained in Journalism at Carleton University, worked in several print and radio newsrooms and then became a free-lance magazine journalist and editor.  (She has also worked in the restaurant industry and in new car sales).

A passion for studying Neuro-linguistic Programing since 1998 has led to a post-retirement business as a NLP Master Practitioner and certified Success Coach.  Leslie supports others who are realizing they’ve “just-gotta-change-or-else!”  She also has returned to writing,  is the author of “The First Little Pig and the Big, Bad, Scary Thought”, and has several other projects underway.

She resides in a pleasant home in Waterdown, Ontario, where visitors will see her 1st degree Goju-Ryu Black Belt certificate (earned at the age of 59), her family (20-something son and 90-something mother, plus Golden the black-and-white cat), and the results of her quarantine-inspired obsession with learning to paint. 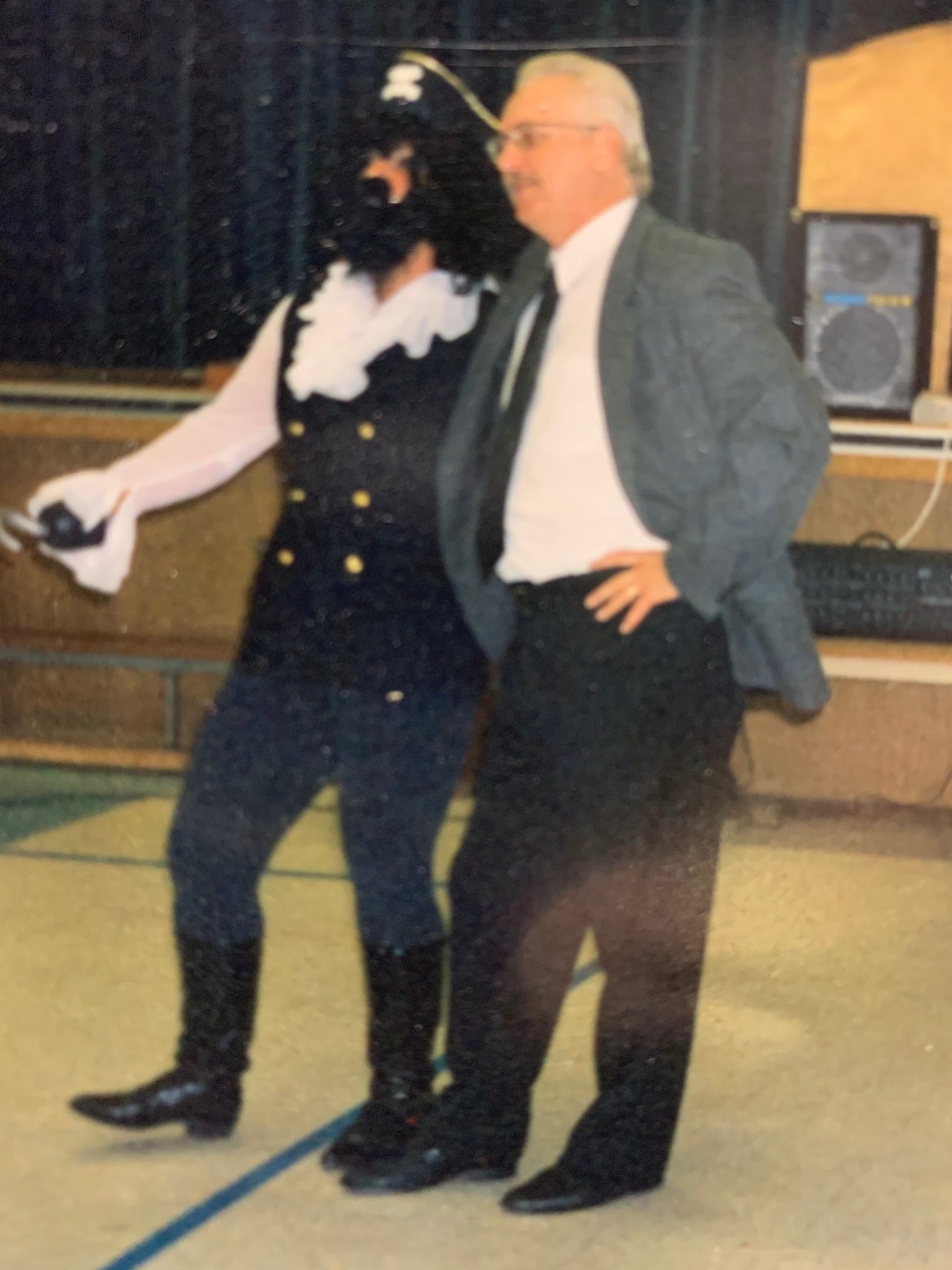 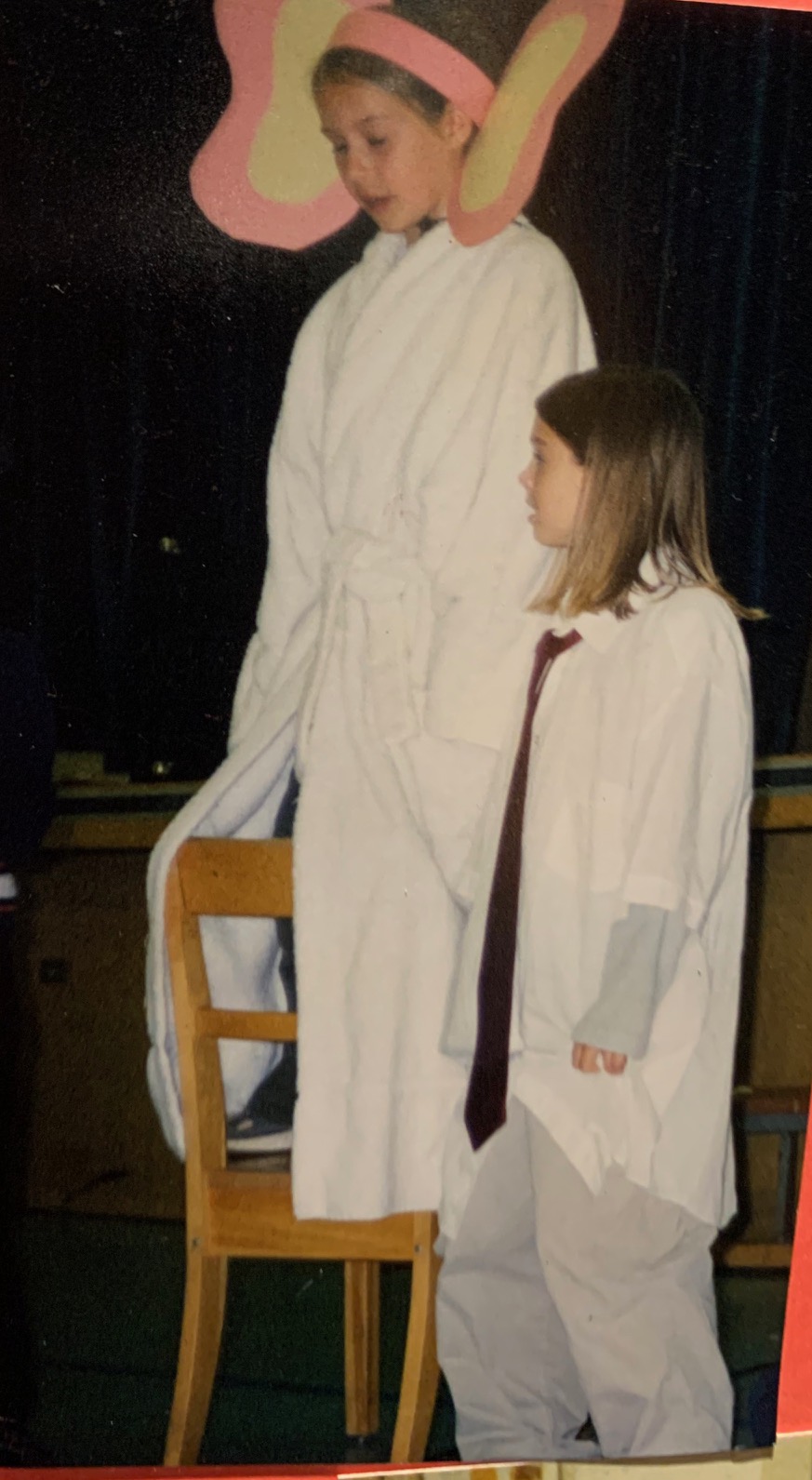